A Dog on a Short Leash on a Rickety Foot-bridge 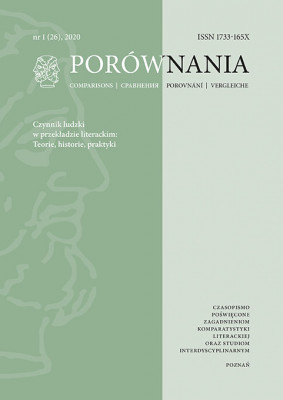 The inspiration for the paper was the metaphor that Dougles Hofstadter applies to translation. He defines the task of the translator – with particular reference to translation of literary texts – as that of the builder of a bridge that spans the canyon, joining its two sides: the original and the translation. An initial rickety foot-bridge, it gradually turns into a sturdy construction with the translator’s repeated attempts at discovering ever-deepening layers of meaning. Inevitably subjective, the building process requires the translator’s concentration upon individual dimensions of the translated text. These dimensions, or aspects, come strikingly close to what is defined as dimensions of imagery in Ronald Langacker’s model of grammar and natural language. In a wider perspective, the convergence is an argument for transdisciplinarity as a valid approach to translation studies. The translator is led by his own competence, imagination and the feeling of empathy, but at the same time they are constrained by “a short leash”: restrictions imposed by languages, cultures and the peculiarities of individual context. To illustrate the point, the author discusses a text (taken from her own translator’s dossier) in which multiple, and sometimes conflicting, identities of the protagonist require particular attention to lexical and stylistic minutiae. It is such details that constitute the leash, at the same time enabling the translator to construct the bridge.