Emancipatory Processes of the Sci-Fi Film in Post-war Czechoslovakia and its Repercussions in Lem. An Introductiory Investigation 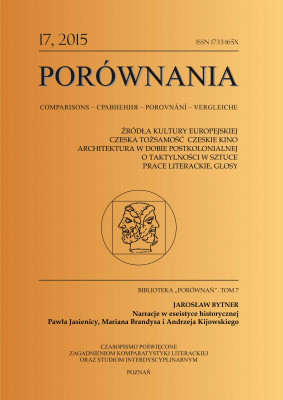 The article presents the first important science fiction films made in Czechoslovakia in three decades, 40s, 50s and 60s of the 20th century, in order to show that they constitute the basis of this type of cinematography in Poland’s southern neighbour. They reflect various models of film fantasy from a pessimistic note in Krakatit (1948) by Otakar Vávra, different from the humanistic optimism of its literary prototype (novel by K. Čapek) put in the context of the post-war nuclear threats to a vivid and graceful 19th century gravure illustrating the novels of Jules Verne in the film by Karel Zeman Vynález zkázy (1958). The last to be made was an adaptation of Stanisław Lem’s novel Obłok Magellana, titled – Ikaria XB-1 (1963) (not mentioned in the opening credits) directed by J. Polák which turned out to be the most modern sci-fi film of the times because of its realism.