Cultural Influence as a Tradition and a Challenge for Czech, Ukrainian and Polish Comparative Studies 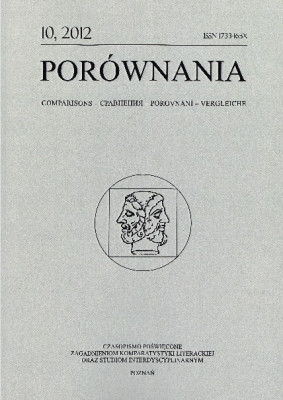 The article deals with ideas of cultural influence which were formulated by Czech, Ukrainian and Polish intellectuals before the second world war. Presented examples of Slavic approach to the problem of cultural domination and inferiority as well as the cultural influence in general, could be seen today as a valuable tradition for comparative studies in the region of Central and Eastern Europe. In contrary to the assumption of the existence of a cultural center and province which separated Western and Eastern Europe, which was such a popular belief in the Western comparative studies up to the late 1950s, as well as its supposition of cultural hierarchy which distinguished mature active, and influential cultures from those which are passive, imitative, only at one of many stages of its development, Slavonic intellectuals thought in a different way about the problem. They saw the process of cultural influence as a more dynamic, creative and complex phenomenon. They also stressed that not only an imitation effort took part in the pursuit of Slavic cultures after more developed Western European cultures, but also anadaptation and modification of all imitated cultural fashions and trends. As a result something new and original emerged on the grounds of Slavic culture. Therefore, their culture did not lose its original character and it should not be treated as a passive reflection of the Western European cultures. The author reminds about those concepts, which were ahead of their times and only today they can be truly appreciated in the context of post-structural changes in the humanities. The author emphasizes also that the approach to the problem of cultural influence played a different role in the development of Czech, Ukrainian and Polish comparative studies referring to the cultural and political challenges created by it.